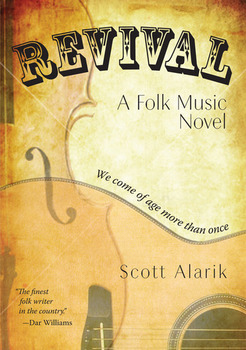 “A joyous celebration of folk musicians and their world.” –– Booklist

There’s never been a book like Scott Alarik’s Revival, a novel set entirely in the vibrant modern folk world. And like a good folk song, word has been spreading throughout that world. It’s being widely distributed in book stores, enthusiastically supported by the National Book Network, whose Northeastern representative, Michael Watson, selected it Rep’s Pick, and Alarik his favorite author. But it’s also being sold in folk clubs, and tracks of Alarik reading from the novel, set to music by Jake Armerding, are heard nationally on folk radio. Revival also won the national Benjamin Franklin Silver Award for Popular Fiction, awarded by the Independent Book Publishers Association,

In Cambridge, where the novel is set, it’s being embraced as no book in memory. September was officially named “Revival Month in Harvard Square,” connecting the book’s release to an array of events that exemplify the square’s unique mix of hipness and tradition. And now the Harvard Square Business Association has decided to make every September Revival Month. “We love the idea of celebrating this book,” said HSBA director Denise Jillson. “Revival Month is not about reliving the past, but reviving the best traditions and making them part of the present. And that’s what Alarik’s novel is all about.”

Award-winning independent publisher Peter E. Randall created a new imprint, Songsmith, expressly for Revival. The goal for publisher and author is to create a bridge between the folk world and the book trade, so that more books appealing to folk fans can be nurtured.

A book like this needed a unique launch, and fabled Harvard Square coffeehouse Club Passim hosted it. Alarik read from the novel, and swapped songs with folk stars Ellis Paul, Meg Hutchinson, Alastair Moock, and Jake Armerding. This, too, is becoming a tradition, and Passim will host a First Birthday Bash for Revival September, 2012. Asked why he wanted to be part of the Revival show, Ellis Paul said, “Because it’s written by Scott Alarik. He probably knows more about folk music than anybody, and has been a great writer for the Boston Globe and other publications. I don’t think anybody could have written a novel like this better. Reading it, I felt like I was looking into my own life, but in a way that was also everybody’s life.”