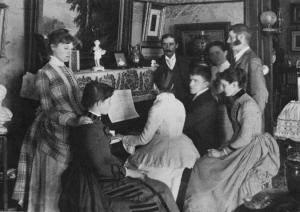 Like a banjo at the opera, the piano can seem strangely out of place in American folk music. Guitars come to mind as folk instruments, along with fiddles, banjos, mandolins, and perhaps the occasional dulcimer. So why is the Lowell Folk Festival, the most traditional of regional summer fetes, toasting the piano?
"Instruments don't belong to any particular form of music," says Joe Wilson of the National Council for the Traditional Arts, which programs the music for the festival. "They're neither classical nor popular nor folk. Pianos, like all other instruments, have taken on regional styles in this country, played in different ways by the ordinary people whose music we celebrate at Lowell."
In a special homage to American folk piano styles, the festival is presenting Chicago blues and boogie-woogie whiz Daryl Davis; dizzyingly quick Appalachian keyboardist Jeff Little, and Old West virtuoso Dave Bourne, who plays the Gem Saloon's piano player in the HBO series Deadwood.
Little says it's often news to people, even in his native Blue Ridge Mountains, that the piano played an important role in Southern mountain music.
"In the 19th century," he says, "pretty much anyone who could afford a piano had one. They were very common rhythm instruments in early string bands."
Bourne has become an avid scholar of the piano's rise and fall in American folk music, just as he has in the ripplingly melodic style of Old West saloon music. He has complained to Deadwood's producers about their historically inaccurate use of guitar-driven, bluegrass-type string bands. Those kinds of bands did not exist in the 1870's, when the show is set; though larger saloons might have had a small ensemble featuring piano and fiddles.
The piano was also a mainstay in American homes - and not just wealthy homes, Bourne says. "In the 1860s, '70s, '80s, everybody had a piano in their parlor. There were 4,000 piano manufacturers in this country alone. It was such an all-encompassing instrument; you could play anything on it."
So what happened? In a word, guitars.
Guitars were not an indigenous American folk instrument. They were always played a little in the Southwest, but mostly by Hispanics. It wasn't until the 1890s, when Sears and Montgomery-Wards offered cheap, sturdy guitars in their catalogs, that it was taken up by itinerant blues musicians, cowboys, farm workers, and other creators of American folk styles. It was much more portable than the piano; and as guitars got bigger, better - and louder - they began replacing the piano as a dominant rhythm instrument.
At the dawn of the 20th century, the fledgling recording industry dealt another blow. According to Bourne, in the first studios, musicians had huddle around a horn-shaped megaphone. The piano couldn't get close enough, and didn't record well even when played solo.
Little says many Appalachian string bands at that time replaced rhythm piano with guitar, in order to record better and tour more easily. He can clearly hear the boom-chick piano influence in the way those early guitarists played.
The piano remained more prevalent in African-American music than in most white traditions, says Davis, because it was common in gospel churches, and in barrelhouses and brothels that couldn't afford bands. Boogie-woogie was actually designed to replicate the full, rocking sound of a combo, with its strutting bass lines, chordal middle passages, and high, quick melody notes.
"Back in the Depression era," Davis says, "when people couldn't afford a band, they would hire a boogie-woogie piano player."
Still, the piano was increasingly regarded as either more of an elite instrument - for classical or highbrow parlor music - or more aligned with commercial music. "It began to be seen less as a people's instrument, more of a high-toned instrument," says Davis. "But the piano definitely has a place in American roots music."
Little learned the Appalachian tunes he plays from guitarists who gathered around his father's music store in Boone, North Carolina. Among them was legendary picker Doc Watson, who never questioned this kid who wanted to join in on the piano. That's just not the way folks think in Boone.
"Around home," Little says, "people sit around playing music together, and don't think about things like correct instrumentation, or what's the proper way to do things. Some people say they might not consider me a traditionalist, because I'm playing this kind of music on the piano. But I consider it my tradition, because it's the music I grew up playing."