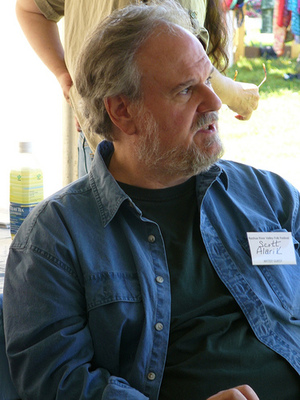 Pete Seeger called Scott Alarik “one of the best writers in America.”

Born January 5, 1951 in Hennepin, Minnesota to parents Carolyn Thacker Alarik and George Hilding Alarik. He became a folksinger after he graduated high school in 1969. He actively opposed the Vietnam War, joining the Resistance Movement while still in high school by publicly refusing to register for the draft. He was convicted of resisting the draft and served 19 months in federal prison. His commitment to thoughtful, mutually-respectful dialogue around national partisan politics continued his entire life.

After his release from prison in 1972, he became a fixture on the national folk music circuit, performing regularly on A Prairie Home Companion, releasing three vinyl albums, and appearing at such legendary venues and coffeehouses across the nation, such as Old Town of Folk Music in Chicago, Caffé Lena in Saratoga Springs, and Passim in Cambridge. A Prairie Home Companion host Garrison Keillor wrote of Alarik, “I have rarely seen an audience in such a good mood as when he’s just been there.”

Scott Alarik’s love for music and the folk community extended from singing to writing and back again throughout his life.

Alarik was The Boston Globe’s principal folk music writer for 25 years (from 1985 to 2010), and contributed regularly to public radio, including seven years as correspondent for the national news show Here and Now, and most recently Folk Tales on WUMB. He wrote for many national magazines, including Sing Out, Billboard, and Performing Songwriter. From 1991-97, he was editor and principal writer for the New England Folk Almanac. He was the first Boston critic to write about many artists, including Alison Krauss, Ani DiFranco, Crooked Still, Dar Williams, Mary Chapin Carpenter, Shemekia Copeland, Sol y Canto, Catie Curtis, Ellis Paul, and Vance Gilbert.

He was a writer’s writer, beloved by his colleagues as much as by readers and artists he wrote about. Wall Street Journal critic Earle Hitchner called him “one of America's most astute music critics and chroniclers.” Lylah Alphonse, who was a copy editor in the Globe’s Living/Arts department when Alarik wrote there, told fellow music writer Jim Sullivan, “I always learned something new and interesting whenever I was lucky enough to get to edit his stories.” Music critic Steve Morse wrote, “I've never seen anyone write better about singers. His description of someone's vocal ability would leave me in awe time and time again.”

His first book Deep Community: Adventures in the Modern Folk Underground was published in 2003. Deep Community documented the landscape of modern folk music so comprehensively, it prompted the Library Journal to call it “an essential primer to the continuing folk revival.”

His second book Revival, published in 2011, was a novel set in the modern-day folk scene. It won the Independent Book Publishers Association’s Benjamin Franklin Silver Award for Popular Fiction, and was embraced by an enthusiastic folk music community, garnering support from folk stars like Tom Paxton, Ellis Paul, Catie Curtis, John Gorka, Alison Brown, Mary Gauthier, and Gordon Bok, who called it “just about the warmest, most nourishing book I’ve read.” “Music lifts us up,” wrote songwriter, organizer, activist, and author Si Kahn. “So does Revival.”

One of his favorite causes was documenting folk history in plain speak, easy to understand and remember, so everyone could participate in the knowledge, legacy and promise of community. He often shared stories to lend context to the whys, hows and what ifs that made things the way they are today. “He had a vision for how things were connected and that is really what made him the cream of the crop. He had an ability to synthesize information in such a way that it led to new revelations and connections. Not everybody can do that,” said MarySue Twohy of Sirius XM.

Part of his process was to dive deep and document. Among his many projects in that endeavor were:

He is survived by three cousins: Elizabeth Swenson from Oberlin, Ohio; David von Fischer from Columbus, Ohio; and Dennis Martin from Salem, Oregon, as well as the Park family from Minnesota, and a large extended family of the folk music community.

The loss of Scott Alarik is felt far and wide, and he thankfully leaves us a rich legacy of his work.