Chris Smither: The Upside of Old 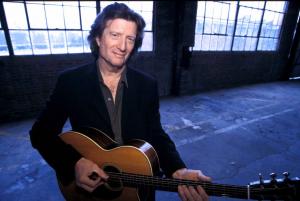 Chris Smither is having the time of his life getting old. For one thing, as he turns 60 in November, his career has never been better. His new Hightone CD, "Train Home," is off to the fastest start of any of his 10 previous records, selling over 10,000 in its first two months and receiving heavier radio airplay than anything he's done.
"You know, every time I finish a record, I think, okay, this is the best one ever," he says, surrounded by his guitars in the large dining room of his Arlington home. "But why this one should take off at a significantly faster pace than any of the others, I don't know; unless its just by sheer force of repition, you eventually build to a critical mass."
He is also in constant demand as a performer, doing 150-175 shows a year, over two-thirds of them at venues he plays regularly. But beyond the professional security, Smither deeply enjoys having reached that time in life when he can grumble about life's vagaries and be seen as a sage poet, rather than a whiny troubadour.
"I'm fond of saying that I'm only marginally convinced I'm ever going to die," he says with a warm, wise laugh, "but the evidence is mounting."
The CD is a spare masterpiece about mortality, full of driving, bluesy ballads that grin wolfishly at life's uncertainties, and at the "train home" that is the only certain thing awaiting any of us.
But the tone is more triumphant than brooding. There is real peace in his acceptance that life's big questions are unanswerable; that our role is simply to ask them, to struggle with our mortality and, of course, lose in the end: "Now is what can be, all the rest is wait and see," he sings in the CD's title cut. And, "Nothing is as clear as this confusion."
"I really am enjoying getting old," he says, "the relief at realizing finally that I'm not going to get those answers. When I was younger, I thought, 'I've got to figure out this stuff before it's too late. And if I don't, how am I ever going to make my way in the world?' Now I realize that nobody ever figures them out. The whole point is to learn how to ride and shift with the going conditions, stay out there looking around, stay in the moment, stay interested. It's such a relief to find out that the answers are not what it's all about."
He sees his seniority as a time to shed the wasteful, often crushing vanities of youth: "Take me as I am, not as I wanna be," he sings; and, with an almost primal snicker, "I never was good looking, but now I'm too old to let that get me down."
"I guess you have to go through the part of your life where you're concerned with things that seem superficial later on," he says. "But they weren't superficial at the time; they're imposed on you by whatever drive it is that makes you want to mate and reproduce. Something is trying to get something done through you, and you finally get shut of it. You don't have to deal with it anymore, and your existence becomes one that's being run from inside you. Oh, it's just great."
He has begun to do some songwriting classes, and enjoys teaching in ways he knows he would not have as the brash young guitar turk who first stormed Boston's coffeehouses in the late '60s.
"Success is not what you think it is," he says quietly. "It's certainly not material success, though material success is nice. But the sense that you've done something to bring people together, to make them happier, is what you have to look forward to - along with a sense of knowing what you're doing, of not being lost anymore."
His eyes dart past his row of guitars, out the window at the turning leaves and pelting rain. "Success is not having people know who you are," he says finally. "Success is knowing who you are yourself." And he laughs again, filled with pleasure that he lived long enough to figure that out.