A Visit With Cheryl Wheeler: "Oh, get over yourself" 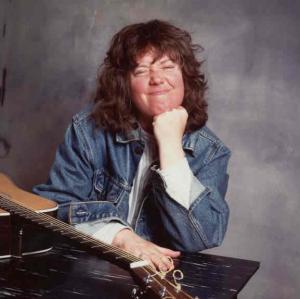 This is your first album of new songs in six years. Why so long?
I just don't write as much as I used to, but I like what I write a lot better. I'm much less inclined to mine my own displeasure as songwriter fodder. That's partly because I'm really quite happy these days, and partly because I'm 53. In your 20s, you think of your own mood swings and vague unhappiness as being worthy of discussion; in your 50s, you don't. Things that would have made me sit down and write sad, little, minor-key songs now make me think, "Oh, get over yourself; you're fine, shut up."
This CD certainly has some sad songs, but it's much more about the wonder of how the good stuff can win out if you let it. That's what I'm getting at with the title, how, ultimately, everybody's defying gravity just by living a good life.

Do you have a regimen for your songwriting?
Often, it begins with me sitting down on the sofa in my living room, or driving in my car, and I'll just start singing a song. I tend to get a big chunk at once, like a whole verse and chorus; and then it becomes this fabulously fun crossword puzzle. Okay, now I've got these forms, what else do I want to say? I try not to think too much, to just keep singing and see what comes out of my mouth. You know, brains are fascinating things, but I think some of the best stuff comes from the unconscious part that's underneath. You don't control that as much as get out of its way.

Your funny songs seem to come from the same place your serious ones do, from observing our lives at their most ordinary, and writing what we all feel about things like noisy cell phones and annoying flight attendants. Is there a different process for writing funny?
Not really. The thread for all of it is that you're absolutely focused and obsessed. My songs come up from an ordinary life, because that's all I know. The test is that when I'm writing a sad song, I should be crying, and when I'm writing a funny song, I should be laughing. If I'm not, I'll stop writing it. Because writing songs is my livelihood, but it's also my sanity and my therapist. If it's doing its job, it should be eliciting all those feelings from me.

Your career seems so remarkably uneventful; you just chug along, year after year, album after album, decade after decade. What's your secret?
Well, I've always been a little bit stubborn, as I'm sure my manager will tell you. I just want to write songs and do my shows; and I want to get to make a living doing that. I don't want to be something I'm not, and I'm not some giant, "Everybody-look-at-me-on-television" person. For years, people have said to me, "That'll limit you," and I've said, "I know that, but that's fine; it's just going to limit your idea of what I want."
If there's a secret to that, it's to put your emphasis on what you do, and not that word 'career.' I've always been a huge believer in the path of least resistance; go with what's coming to you. I figured if I'm any good at this, and I believe I am, somebody will come to me and say, "I want be your manager," or, "I want to put out your records." And those things did happen, on a nice, small scale; so I never have to be anywhere at seven a.m. to sing on some TV show. And that's ridiculous - who sings at seven o'clock in the morning? So I don't think very often about career; I just think about the next song and the next show.