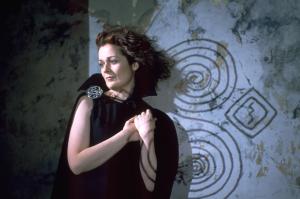 It is virtually impossible to wander a mall this time of year, and not realize we're missing something in the way we mark the special moments of our lives. When those kinds of troubling thoughts percolate, Irish harpist-singer Aine Minogue has some lovely remedies.
The Tipperary-born Arlington resident has made a cottage career out of making music truly useful in people's day-to-day lives; releasing a series of beautifully realized theme albums on marriage, midwinter, meditation, and most recently, "Celtic Lamentations," about grief and mourning.
In 1999, she walked away from a promising four-record deal with RCA, because she yearned to to be a community musician in the truest sense. Performing for a family wedding or wake seemed far more important to her than, as she puts it, "donning an ego" to sweep across a concert stage.
This thinking actually began in 1995, with her delicious rum-toddy of a seasonal CD, "To Warm the Winter's Night." She didn't just want another litany of Christmas's greatest hits, but to really explore how these ancient midwinter melodies made us feel - and why.
"With that CD," she says, "I wanted to really explore the moods of winter. The holiday season today intensifies how a lot of people feel their lives should be, but aren't. The great lesson from the old Celtic celebration of winter solstice, however, is that you go into the darkness only to leave it behind and move, every so slowly, back into the light, back into life. It was a way for people to leave the negative behind."
Doing holiday shows, she felt she was providing a genuine service. And what audiences want at Christmas is just what the Irish harp, and her whisper-pretty soprano, were designed for.
"I find people deeply in need of some calmness," she says. "They really don't want to be enlivened; they need to exhale. They're looking for some respite and comfort, seeking the contemplative side of the holidays. They want to go to that place, but maybe it's too hard to go there alone. So you seek community, and the safety of music."
Minogue's latest CD was by far her most daunting. How could she musically guide people through anything as intimate and harrowing as the loss of a loved one? But the lack of contemporary music on the subject, compared to the wealth of music ancient people used, told her there was a crying need for it.
Ellen Kushner hosts the popular public radio program Sound and Spirit, which examines how people throughout the world use music, ritual, and art. She loves the tender, thoughtful way Minogue conceived the CD, particularly that it reveals how many complex moods there are to mourning.
"It's a beautiful, sweet, lovely album that reflects feelings of sorrow, but also contemplation, regret, some bitterness, even horror," Kushner says. "But through it all is this warm bath of grieving, where you can just allow yourself to be miserable; maybe allow someone to put their ams around you."
Minogue wanted the CD to serve as a map for the inner-journey mourners must take. She lost her mother when she was 12, so she knows acutely what a long, many-layered process it is.
"The album goes from very primal keening, or mourning, that women did in private," she says, "to the more formalized laments played for public grieving. In between, I tried to show how music was used as a tool to capture the different moods in the grieving process: sadness, of course, but also regret, anger, resentment, loss, and the inevitable return back to life."
There are moments of piercing grief on the CD, mostly sung wordlessly by Minogue or throat-singer Baird Hersey. But there are also moments of wistful melodicism, meant to evoke pleasant memories; soothing, spacious moments meant for random reflection; and passages billowing with hope, marking the slow turning back from grief to life. They are all wonderfully played by an all-star Celtic cast, including flutist Joanie Madden and guitarist Scott Petito.
Minogue says mourning was once a highly ordered process, every step accompanied by particular music. There were, for example, improvisational songs, in which relatives could express negative things about how they viewed each other's relationship with the deceased.
"You'd say these things in song," Minogue says, "so you had to think about them, not just blurt it out. You were surrounded by other people, so you couldn't go too crazy; but you could express negative feelings. As you might imagine, this was very common between wives and mothers-in-law, a ritualized way of voicing feelings of recrimination or anger. The wisdom of it is a beautiful thing."
She sighs then, considering how little of that useful musical wisdom is available in our quick, distant, feel-good culture. Both she and Kushner point out there are an infinite number of songs today for the loss of romantic love, but virtually none for the loss of a loved one by death.
"No matter what tradition you came from," says Kushner, "the world used to be organized around the process of grieving. There were things you were and were not socially allowed to do; and people were aware you were in mourning, by the colors you wore, or because you hung garlands on your home. So everybody knew, 'Tread carefully, this person is going through something big.' And we've lost that; I really don't know why."
Minogue says, "The more I researched, the more I realized we don't incorporate grief and mourning in our lives as a natural part of the maturing process. We almost treat it like an accident, as opposed to a natural stage of life, something everybody goes through. If I was saying anything personally, through my own voice, it was just that you're not alone; these are things we all feel, every one of us."
This story originally appeared in the Boston Globe